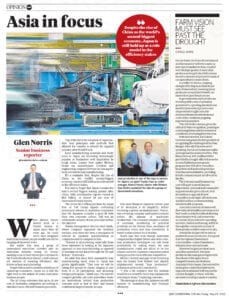 When Akinori Hyodo started work at a Toyota factory in Japan more than 40 years ago, he could never have imagined Australian business people would one day be hanging off his every word.

But earlier this year, a group of Queensland executives crowded into an Australian Industry Group (Al Group) meeting room to hear Hyodo give a lecture on the Toyota Production System, a half-century old method of boosting efficiency, also known as lean manufacturing.

Forget China and its markets of millions of cashed-up consumers.  Japan Inc is still the right stuff In the minds of many Australian business people.

The Al Group estimates that up to 20 percent of Australian companies are seeking to introduce more efficient business processes.

Top of the list is the adoption of Japanese-style lean principles and methods that allowed the country to rebuild its crippled industry after World War II.

It’s a reminder that, despite the rise of China as the world’s second-biggest economy, Japan is still held up as a role model in the efficiency stakes.

It is easy to forget that Japan remains the state’s second biggest trading partner after China, with merchandise exports valued at $8.8 billion, or almost 20 per cent of Queensland’s total exports.

The recent $6.5 billion purchase by Japan Post of Toll Group signals continuing investment interest in Australian companies that the Japanese consider a good fit with their own corporate culture. Toll was an enthusiastic adopter of lean principles before the takeover.

Shinka Management director Paul Smith, whose company organised the Brisbane seminar, says there has been a resurgence of interest in Japanese manufacturing as companies seek to compete In Asia. “Interest is skyrocketing, especially from those interested In looking at the Japanese approach to lean manufacturing as opposed to learning second-hand through the US and Britain,” Smith says.

He adds that since 2013, demand for lean manufacturing study tours to Japan has grown significantly. “This year we will be taking five groups to Japan, ranging in size from 15 to 20 participants, and including foreign participants,” Smith says. The need to compare globally, cut costs and reduce waste are motivations behind lean production concepts such as ‘Just In time’ and kaizen (continuous improvement), he says.

Like most things in Japanese culture, part of Its attraction is its simplicity. Before becoming a global car manufacturer, Toyota, was a weaving company and wanted a way to reduce the amount of machinery breakdowns. The company adopted a system of continual monitoring of potential problems on the factory floor, avoidance of production errors, and lean inventories. It wasn’t rocket science but it worked.

Smith says that even though Australian companies face higher labour and other costs, lean production techniques can still boost productivity by cutting waste. He says manufacturers could not afford to be too relaxed and even Japanese companies risked losing ground to more efficient competitors.

The message is clear: the Japanese are still masters of manufacturing and business efficiency.

In the Press
Sign up to our eNews
Go to Top