Lean manufacturing is a production philosophy that has evolved out of practices made famous by Japanese industry over the past several decades. During the week-long study tour participants learned about the implementation of lean manufacturing and continuous improvement practices in some of Japan’s top companies.

The tour has been run annually since 2007, and originated from the awareness that there has not been a genuine example of lean production principles being applied in an Australian company over an extended period of time. Through discussions with company management in Japan, participants learn how to establish, implement and sustain lean programs. This knowledge is brought back to Australia for the betterment of their organisations and the industry as a whole.

Innes Willox, Chief Executive of the Australian Industry Group, has been outspoken about the need to strengthen Australian industry competitiveness. “Particularly with the recent events affecting manufacturing in Australia, the need to strengthen our productivity improvement capability is more apparent than ever. The Australian Industry Group Lean Japan Tour provides the opportunity to learn from the decades of lean management innovation and know-how that has been developed in Japan,” said Willox.

15 participants attended in November from 10 organisations. As the manager for Enterprise Connect’s Best Practice Unit, Lee Baines participated in the tour with an interest in using lessons to assist Australian industry. “Australian businesses need every weapon at their disposal to help compete in a global market,” said Baines.

In this regard, we have a lot to learn from Japan, a country that has experienced similar challenges to Australia related to cost of labour and strong currency, necessitating a laser-sharp focus on productivity improvement for their manufacturers to remain competitive on the global stage.

Jeremy Hawkes, Managing Director of Bowhill Engineering, attended the tour as a recipient of a grant from South Australia’s Industry Leaders Fund. Hawkes chose to join the tour because his company was beginning its Lean journey, and had eight of his staff commencing a Certificate IV in Competitive Manufacturing.

“I joined the Lean Japan Tour because I felt it was important that management have a good understanding of the bigger picture of how lean manufacturing is implemented on a global scale,” Hawkes wrote in his report back to the Industry Leaders Fund. “The tour was a rare and valuable experience to witness firsthand what a world-class productive and efficient manufacturing environment looks and feels like.”

“We are increasingly operating on a global playing field and development of appropriate strategies to compete is necessary. There are so many ideas that we will bring back and weave into our business, but none are more valuable than the Japanese lean manufacturing principles. These can be adapted to suit our business and the Australian workforce that we employ.”

“We are increasingly operating on a global playing field and development of appropriate strategies to compete is necessary. There are so many ideas and lean lessons that we will bring back and weave into our business, but none are more valuable than the Japanese lean manufacturing principles. These can be adapted to suit our business and the Australian workforce that we employ.”

The tour commenced in Tokyo with a briefing on Japanese customs and business etiquette, and a seminar from the Japan Management Association Consultants on lean manufacturing implementation in Japan.

The group then travelled to Nagoya and spent two days with a Toyota Group lean training facility, learning about the Toyota Production System (TPS) and the elimination of waste, overburden and unevenness from manufacturing processes. In between classroom and hands-on training sessions, visits were held with second and third-tier suppliers in the Toyota Group, and with Gifu Auto Body’s Hi-Ace production plant and Toyota’s Motomachi Factory. Participants developed an insight as to how TPS enables Toyota’s people to work smoothly and efficiently, and achieve extremely high levels of quality and productivity.

Andrew Marshall, Production Manager for Wineworks Marlborough, a previous tour participant from New Zealand, was impressed by the culture surrounding lean production in the companies visited.

The systems, machinery, processes and people in Japanese businesses are something to be admired,” Marshall said. “The passion for lean manufacturing shown by every staff member was evident and the dedication shown at all levels of management was significant.”

“The lean implementation is at such a high level at some of the sites we visited that I realised how many more opportunities there were at my own site. I have emerged with a new passion and enthusiasm for lean manufacturing.” Whilst the Japanese automotive industry can be credited with much of the development and popularisation of lean, the production philosophy has been adapted and evolved by a wide range of industries including food and beverage, electronics, pharmaceuticals and the service industry. 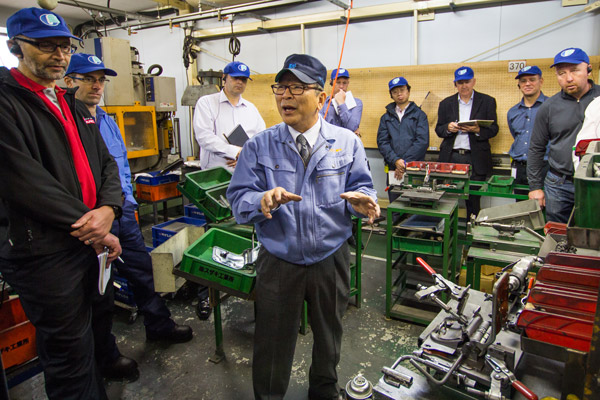 During the second-half of the stay in Nagoya the group visited gas appliance maker Rinnai, where they witnessed a level of excellence in organisation and cleanliness that is rarely encountered. Rinnai’s passion for quality is second-to-none, and is summed up in the corporate slogan ‘Quality is our Destiny.’

Amongst the other factory visits was Chuo Malleable Iron, which only recently adopted lean practices in response to pressures surrounding the Global Financial Crisis and the Fukushima triple disaster which had the organisation on the verge of bankruptcy. Their case study on their creation and implementation of a lean production system and subsequent return to profitability was particularly relevant to smaller manufacturers that are just starting out on their lean journey, and to those looking to encourage new ideas within their organisation.

Stuart Baak, Regional Manufacturing Excellence Manager for food and beverage company Lion, reflected on the importance of the change in mindset that the tour promotes. “The insights that are possible on tours like this can really challenge your thinking around the key success factors for implementation, and enhance the chance of success on your own journey,” he said.

These ideas were echoed by Greg Curcio, who stated that the ideas stimulated through his visit to Japan helped Metro Trains Melbourne reform their entire vision of what improvement means for their business.

In November, Shinka Management in conjunction with the Australian Industry Group conducted a lean manufacturing study tour of Japan. The tour provided Australian industry leaders with first-hand experience of world-class lean implementation in a country renowned for its productivity, quality and safety levels.

In addition to learning about Japanese management philosophy and productivity practices, the tour group spent the week immersed in Japanese culture, local food, drink and entertainment, and developed a knowledge and appreciation for the country that will serve them well in any future dealings with Japan.

A series of briefings are planned for Sydney, Melbourne, Brisbane and Adelaide in February at which tour participants will present their lessons from the November tour. These briefings will be combined with a tour of a local company.

The next Lean Japan Tour will be held during the 18th through 24th of May 2014, and in addition to automotive and manufacturing companies will include visits to a food and beverage producer and a logistics facility.

This article originally appeared in Manufacturer’s Monthly on the 9th January 2014.

In the Press
Sign up to our eNews
Go to Top