As a high school student, I was fortunate enough to experience a one-year exchange program to Kumamoto, Japan. During the course of the year, I lived with a number of Japanese host families. I have managed to remain in touch with them over the years and visit them every so often when I travel to Japan. 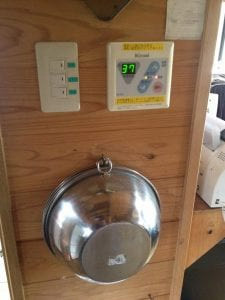 Since one of my host fathers retired a number of years ago, I noticed that his city home and mountain shack were starting to become quite visual. In the bathroom, for example, he had labels everywhere indicating light switches, showing the hot and cold direction on taps and indicating where things belonged.

He also had a number of woodwork projects completed. Five years ago he installed an enclosed iron fire into the main room of the shack. Inside the fire sits a tray that collects the ash from the wood as it burns. On my most recent visit to his mountain shack, I was sitting in the main room next to the window watching him go through the process of cleaning this tray. 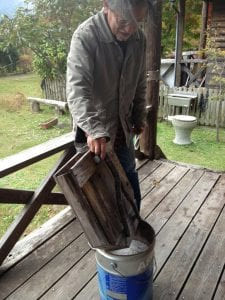 d around and said to me that he always had trouble with the ash blowing off the tray and around the inside of the shack as he removed the tray and took it outside. At this point he walked outside the window and took a tool that he had a set location for on the wall outside. He brought the tool to the fire and slid the ash tray into the tool. This prevented the ash from flying through the air inside. He then took the tool out to a large bucket. He designed the tool so that he could empty the ash out directly from the tool. Of course, the other end of the tool is smaller so that the ash does not spill all over the ground. He placed the tool back in its set location on the wall outside and brought the tray back inside to the fire. 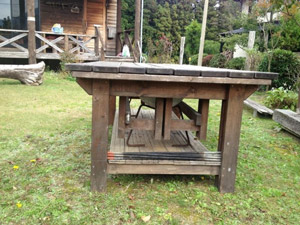 I asked him to show me another similar improvement he had made. He took me to the grassed area outside and had me help him pull out what appeared to be a large wooden table. He had designed it, however, so that two benches could fit into the centre for compact storage. In the hole created by taking the benches out sat a BBQ charcoal tray. As I asked where he cooked the food, he pulled out four rods (marked in red at one end) that sat in holes on either side (one end painted in red) across the gap in the table. The mesh to cook the food on sat on these rods. How brilliant! He had designed a BBQ table set that was visual and compact. 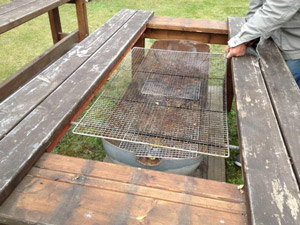 I hadn’t thought about it previously, but I started realizing that he was applying visual management, 5S and kaizen across his life. When I first told him in 2004 that I had started working for Japan Management Association Consultants, he said that during his career with the Kumamoto prefectural government, he had taken some training from the Japan Management Association. But when I started testing his formal knowledge of the above management concepts, he had no idea what I was referring to.

Why would he be acting this way? Where is this thinking coming from? Is it a thought process that is second nature to Japanese? That night over a shochu (Japanese vodka) I started discussing my observations with him further. He gave two simple reasons to explain why he behaves in this manner.

Firstly, he has a lot of people visit his shack for BBQ parties, outdoor concerts and mountain climbing. He makes things as visual as possible to make it easy for anybody, anytime, to understand where things are, where things need to be returned and the function of each switch in the shack. It saves people from asking him these questions over and over again and wasting his time. 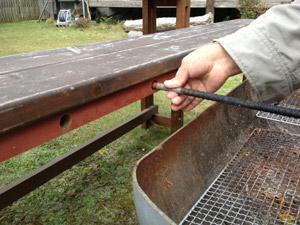 Secondly, he likes to make life as easy for himself as possible. He is not a strong person, he isn’t a tall person and he isn’t getting any younger. So he sets his life up around himself so to make it simple to achieve tasks without wasting time, without physically wearing out his body and without redoing things because they didn’t work the first time. In other words, he is improving the environment around himself so that he can achieve things within his physical limitations.

It sounds like a familiar tale doesn’t it? These are concepts that we try and achieve in our efforts to improve our workplace. Giving items set locations, making locations visual, and implementing ideas to improve the safety, efficiency and quality of our work.

You see similar thinking around Western homes too. Some of the best shadow boards I have seen are in people’s sheds. The resident handy man loves to make small improvements around the home to improve life.

My host father has taken the visual aspect to another level, but continuous improvement thinking is not only inherent in the Japanese. It is something that we all have inside of us, but often only utilise at home. The magic is to unlock ability in the workplace.

Ben Sparrow is a Director of Shinka Management, a company of lean consultants supporting clients in over 60 countries to improve productivity through Japanese lean manufacturing practices. His experience includes eight years with Japan Management Association Consultants (JMAC) transferring Japanese lean management and lean manufacturing concepts and know-how to companies outside of Japan from a broad range of industry sectors.

Stay up-to-date with our activities, events and training by subscribing to our eNews.