The coronavirus pandemic has brought us unprecedented challenges. As we try to get to the other side of this public health crisis, governments around the world are pushing to vaccinate citizens as quickly as possible.

However, having the determination is one thing, whilst providing access to vaccinations as quickly as possible is another.

Many countries have been struggling on this front, and there is no denying that the lack of funding, resources and distribution capacity have been exacerbating the problem. However, as we look beyond such macro supply-level issues, we also see issues related to a lack of effective processes around vaccination deployment as a major contributor to this problem.

The path Japan took over the past several months on the mass vaccination deployment front highlights the importance of process management and continuous improvement, and how the concept of lean can be applied to many sectors outside of manufacturing – even in public health.

This article will feature some of the inspiring stories and case examples coming out of Japan that showcase how practical applications of lean from the Japanese manufacturing sector have helped streamline and improve Covid-19 mass vaccination deployment in the country.

Japan was one of the slowest nations being vaccinated

Japan commenced its COVID-19 vaccination program on the 17th of February this year, and initial progress was slow. By early May, only 2.7 % of Japan’s population had received at least one dose of vaccination*1. Japan lagged way behind the international standard in the first half of 2021, ranking last amongst OECD countries.

There were several reasons for this delay, but one of the biggest reasons reported was related to ineffective management of the mass vaccination project. The Japanese government decided back in December last year that vaccination should be carried out mainly by municipalities within the framework of the Japanese Immunization Law. As a result, the responsibility was left to local authorities and many municipalities found themselves struggling to deal with this unprecedented scale of mass vaccine administration without specific direction and support from the central government.

With the number of confirmed COVID-19 cases increasing and the Tokyo Olympics looming just around the corner, there was a mounting sense of crisis and frustration within the country. Against this backdrop, when the Japanese government decided to extend the emergency declaration for the third time on the 7th of May 2021, then Prime Minister Yoshihide Suga announced a target of 1 million doses of vaccine per day to fight against the COVID-19 infection while noting that the Government would do everything in its power to support local authorities.

Following the Government’s announcement of a large, specific target, many municipalities started to actively seek advice and support from their local manufacturing sector in order to boost the capability of their mass vaccination effort as well as to address some of the challenges they were already being faced. Japanese people are well aware of the reputation of Japan’s manufacturing sector for its excellent process management capabilities, especially relating to productivity, quality and safety. As many businesses were already looking for ways to make positive contributions to society amidst this pandemic, it was only a matter of time before local government and the manufacturing sector came together to work on this front.

Toyota’s involvement in its hometown

One of the companies that led the way was Toyota Motor Corporation. Since the onset of the pandemic, Toyota has been active in tackling challenges related to the outbreak, and supporting communities with the production of face shields and foot-operated disinfection stands, and the provision of process improvement support for the production of medical protective gowns.

After receiving a support request from Toyota City in Aichi Prefecture where Toyota Motor Corporation is headquartered, the company was quick in opening up several of the welfare facilities they own within the city at no charge, to be used as mass vaccination venues. In addition to providing venues, Toyota cooperated in the operation of those sites as well, working together with the municipality and the local medical association, and leveraging its experience with the Toyota Production System, to ensure residents could be vaccinated safely, securely and efficiently.

As part of this support, Toyota conducted detailed analysis of the vaccination process and visualized the flow of people as well as each element involved in the mass vaccination in the form of a Material and Information Flow Chart (MIFC). After all the details were revealed, they identified bottlenecks and waste in the process, and proposed an optimal layout of the venue which minimized the liner movement of people. They also provided visual support for those visiting to receive their vaccination, by creating large information displays and guide signs to lead people smoothly within the venue.

But, what’s more important to note is that once their vaccination venues opened, representatives from Toyota constantly monitored the process on site and every time a problem was identified, they worked to uncover the root cause of the issue, allowing them to implement a countermeasure to address it. They also held regular meetings with the medical staff and supporting personnel working at the front line to extract the issues and challenges they faced on the vaccination floor and applied a solution to those issues straight away. If the solution didn’t fully address the problem, they applied further improvements. This reflects the true spirit of Toyota’s kaizen management approach, where they never regard things as perfect or as their best and aspire to improve continuously.

With the application of the TPS approach, one of Toyota’s mass vaccination venues located at the Tsutsumi Plant started its operation on the 30th of May with people going through the entire process from the reception to the end of vaccination administration in seven minutes (excluding post-vaccination waiting time). According to the Japanese local Chukyo TV news reported one week later on 7 June, people were by that stage going through the same entire process within 5 minutes, suggesting a two-minute reduction in processing time within a week through the implementation of continuous improvement. However, Toyota’s pursuit for kaizen management didn’t end there. A further report that came out of Japan a week later found that the Toyota model was achieving 4-minute processing times – now that’s what real continuous improvement is all about. 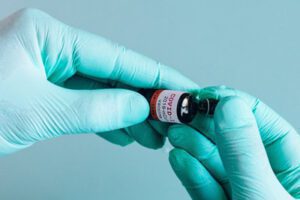 The Yomiuri Shimbun Online featured an article on the 12th of August this year reporting that Sakai City has approached major local manufacturers after the city experienced a number of safety-related incidents and issues at their mass vaccination centers.

One of the manufacturing companies that came to the rescue was Kubota, a leading Japanese agricultural and construction equipment manufacturer headquartered in Osaka prefecture. The company inspected the Izumigaoka Center Building, one of the city’s mass vaccination sites, six days after a serious incident occurred in the center where an elderly person was injected with a syringe with a barrel filled with only saline solution rather than vaccine. Similar incidents were experienced in other vaccination centers that the city managed as well.

Separate to the syringe incidents, the city also had to dispose of over 660 doses of vaccine due to a storage refrigerator being turned off by mistake. This incident occurred twice in early June within a matter of two weeks at the same location. In fear of losing the public’s trust, and concerned that similar incidents may occur at any of their mass vaccination sites, the city was quick to request help from the Nippon Telegraph and Telephone West group (NTT West) to address this issue by introducing an ICT-based solution to all of their mass vaccination sites. According to the same Yomiuri Shimbun Online article, a system was installed to automatically monitor the temperature in the refrigerator every 10 minutes, with the system issuing an alert email if it falls outside the set temperature. Since a series of measures were implemented, there have been no significant incidents reported in the city’s mass vaccination program.

Manufacturing management capabilities put to use for workplace mass vaccination

Some of Japan’s major manufacturing companies have also been playing a role in supporting vaccination efforts by running mass workplace inoculation programs at their production sites.

A Sankei News online article from the 27th of October featured the mass vaccination program ran by Panasonic, Japan’s leading consumer appliance and electronics manufacturer, and Daikin, one of the world’s top air conditioning manufacturers. Both companies rolled out company-led vaccination programs in June to inoculate their employees and their families across their domestic bases in Japan.

Panasonic captured the movement of people using video to understand and improve the layout of their vaccination sites and the flow of people and staff allocation. This approach mimicked a process management approach used commonly within their factory operations. By the end of August, Panasonic managed to complete the inoculation of 85,000 people across its five major bases including Tokyo and Osaka, and they are now rolling out the program to more than a dozen regional bases across Japan.

At one of Daikin’s mass vaccination venues, an andon system was introduced to signal the availability of vaccination booths with a flashing light to help move people through the process smoothly. Based on a similar mechanism already used on their assembly line, they also created a railed platform with moving trays on top to constantly deliver new syringes to the side of the vaccine administrator.

Japan as one of the most vaccinated countries

As these examples highlight, the practical application of lean concepts is transferable to non-manufacturing sectors as well. As was evident by the examples shown, many of the solutions implemented were not necessarily drastic, complex or expensive. They were rather an accumulation of many small and simple improvements implemented one after another. Despite the simplicity, such an approach has been shown to be extremely effective in achieving process improvement. The impact is especially apparent when the volume passing through the process is of such a large scale, as in the case of mass vaccination centers. The secret to succeed with such an approach is to set your mind on improvement and to be open to identifying opportunities by analyzing the current situation with a critical eye. It is also crucial that improvement ideas are immediately translated into action.

Japan is now one of the most vaccinated countries on the planet with over 76 per cent of the country’s population of 126 million people fully vaccinated*2. Japan is leading the G7 countries in terms of vaccination rate at present*3 and is currently preparing to launch a COVID-19 booster program from the 1st of December.

Considering the initial confusion and frustration the country went through, what a remarkable transformation this has been, helped in no small part by the excellent process management capabilities and know-how provided by the Japanese manufacturing sector.

Eri Dennis is a Consultant of Shinka Management, a lean training and consulting firm with clients in over 60 countries. Eri is a regular leader of Shinka Management’s lean manufacturing study missions to Japan. Eri graduated with a Master of Arts in Japanese Interpreting and Translation from the University of Queensland and is NAATI accredited as a Professional Level Interpreter and Professional Level Translator.